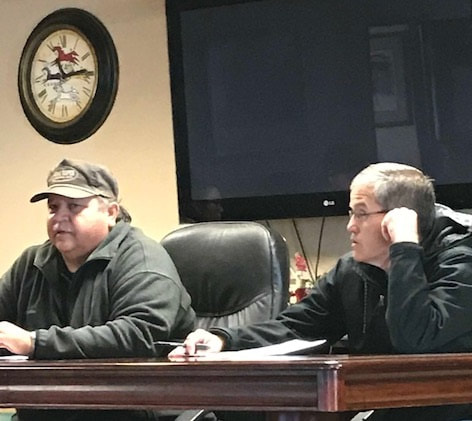 ROSEBUD – Several entities of the Rosebud Sioux Tribe came together last week to identify resources in preparation for the coming winter.

“We are gearing up to get a better handle on service requests during extreme cold or blizzards,” stated Bill Giroux. He is Director of the RST Emergency Preparedness Program (EPP). “We would like each department to provide us with a list of people willing to volunteer and the equipment available when EPP is activated.”

The EPP volunteer staff come together at the Water Resources building north of the Rosebud Hospital when the service is activated by the Tribal President. In the past, EPP has transported dialysis patients, opened rural roads and delivered wood to elders.

“We try to make a decision to call off school the night before when a blizzard hits,” stated Tim Cournoyer, Transportation Director at Todd County School District. He works with law enforcement and other staff who maintain highways when making a recommendation to the superintendent, who is the ultimate decision maker when it comes to cancelling school.

“We make every effort to notify parents by 6:30 am with a phone call when there is a late start or school is canceled for the day,” Cournoyer stated.

“There needs to be a policy established when weather conditions warrant cancelling school and work,” stated Scott Herman, RST Vice-President. Currently, the tribe generally follows the lead of the local schools when a blizzard hits. “We need to work together to be able to coordinate the closing of schools and programs.”

“When the police department advises no travel, it means no travel,” stated Marlin Enno of the Rosebud Police Department. “People put themselves at risk in blizzards, I wish the Rosebud Casino would shut down when the roads are bad because that’s where everyone tries to go.”

“We have a lot of incidents where we have to move people during storms who are stranded and can’t get home or need medical attention,” Enno continued. “There’s no magic in a cop car during a blizzard, we get stuck just like everyone else.” He also told IHS officials who were present to recommend to their higher ups that the clinics be shut down when school is cancelled.

“We try to get all of our dialysis patients in to the clinic before a storm hits,” stated Giroux. “We have to take care of these people first before we can provide services to anyone else.”

“Each dialysis patient needs at least 2 hours in the clinic,” stated Antonia Antman, Davita Facility Administrator. “A day that starts at 5:30am and runs through 8pm will allow 3 shifts of patients to dialyze. A registered nurse must be on site to oversee a shift. We have 3 RNs who all live in Valentine, Nebraska. We have technicians who live in Rosebud and they can set up a shift, but an RN must be present to oversee the patients.”
Several programs offered the use of 4-wheel drive trucks, equipped with snow plows, during blizzards. Many also stated they have other equipment which can be used during bad weather.

“If you want to volunteer and your program has a heavy-duty vehicle you can take home, we would appreciate it because then you can help in the community you live in by moving snow or keeping us updated on conditions out there,” added Giroux. “If you have an elder in your community who needs wood delivered, please call us and we will get out there.”

“All 21 communities have generators that automatically kick on when power is lost in the main building,” stated Ken Haukaas, Tribal Utilities Commissioner. “I’ve checked out the community generators and all but 3 are working. Those 3 will be up and ready for use by December 1.”

The tribe also owns 2 large mobile generators which can be transported to any area they are needed. Each mobile generator is accompanied by 500-gallon diesel tank. “These bigger generators can be used to power a large building in case of a power outage,” Haukaas continued. “It will give people a place to go during a prolonged power outage.”

“We have to start informing people through public service announcements before a storm hits,” stated Vice-President Herman. “This would be a way to let people know the weather is coming and to get prepared by stocking up on food or wood and to get medicine refilled.”

More volunteers are needed to help with providing services to local residents during an EPP activation. To volunteer your services, contact Bill Giroux to be put on a list. When inclement weather hits, EPP volunteer staff can be reached at 605-747-2559.