“We are here today to present a petition of 55,000 signatures representing people from all over the world,” stated Phyllis Young, Standing Rock tribal citizen and former tribal council member.

“The petition was submitted to the Morton County State’s Attorney office with 55,000 signatures on paper or online,” Young continued. “That’s a pretty good representation of human interest in our cause and our case today. Those petitions represent 400 additional people who are being prosecuted in the court here, about 400 have already gone through the court system. There have been many charges dropped or dismissed.”

“This petition is representative of what happened one year ago today, when water protectors suffered the most violent confrontation inflicted by Tiger Swan, in cooperation with every law enforcement on a local, regional and national level,” Young stated. “The crimes and acts of war that occurred a year ago today is why we are commemorating today and asking for dismissal of the charges.”

On November 20, 2016 a large group of people gathered just after dark on the Backwater Bridge north of the Oceti Sakowin Camp. The temperature was below freezing, yet the militarized police force sprayed the group with cold water from cannons and shot projectiles into the group.

Two women were seriously injured. Vanessa Dundon’s retina was severed in her right eye after she was hit in the face with a tear gas cannister. Sophia Wilansky had to have her left arm surgically restored after being hit by a rubber bullet and a percussion grenade. Nearly 30 other water protectors were treated for injuries at local hospitals. Live video feeds from drone operators and amateur journalists were viewed worldwide.

“We brought this petition as an offering because one year ago today, phone calls from all over the world poured in to Morton County asking for help for all of the water protectors on the bridge who were being hurt,” stated Holy Elk Lafferty, a Cheyenne River tribal citizen. “But the world’s cries were ignored as people were injured. People suffered permanent physical, mental and emotional damages.”

The Morton County State’s Attorney office “did not have any comment on the petition,” stated LaDonna Tamakawastewin Allard, a Standing Rock tribal citizen who founded the Sacred Stone camp. “We reminded them of the 1-year anniversary of the water cannons.”

“We talked about the injustice that has happened here in this area. All of the people suffering today with the memory of what happened on the bridge one year ago have a right to justice. We don’t want to be an aggressor, we want to be a defender; to stand here to defend our home, to defend our land,” Allard said. “I love my river and I love my home.”

“It was a very intense meeting to sit across the table from someone who holds so much power over the freedom of our people in his hands,” Lafferty said.

“We all know that along with those pipelines, come the man camps. Our women, our little girls go missing, they are targeted by men in those camps. Women are murdered in some cases and never found. We are preyed upon by the men who live in these camps,” Lafferty continued. “I asked the States Attorney’s representative to take this seriously and to acknowledge that all women of all colors are valuable. I asked him to join in this fight with us.”

“We have been on the front lines for 10 years fighting off pipelines that have come through treaty territory,” Young said. 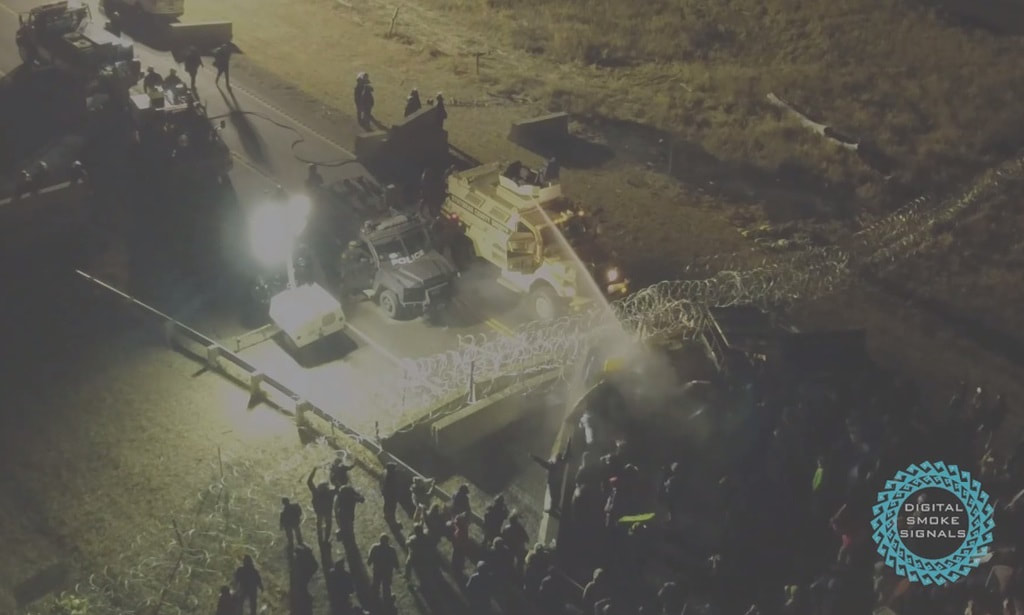 Footage of the November 20, 2016 assault on Water Protectors at Backwater Bridge near the Oceti Sakowin Camp was captured by drones. Photo courtesy of Digital Smoke Signals.